Long overdue explanation of the Early Adopter stuff, how the waiting list works and how to get your hands on a stick.

Everyone has been understandably eager to know how to get a stick and when they would be released so here is a clarification of the current state of the project and plan going forward.

If you’ve been following me on twitter you will have seen a sporadic stream of dev pics and mini-updates but admittedly there has been a lack of solid details about how to get one.  My focus has been primarily on refining the workflow and process so I’m sorry for the lack of details regarding the commercial side of things.

Testing, problem solving and refining these sticks has been a huge challenge, very time consuming but also a ton of fun. Left to my own devices and given an unlimited budget I’d probably just keep tinkering with these things forever. Admittedly if I did that I’d likely have a lynch mob after me. 🙂

The difficulty with this kind of development process is that there’s a constant change in “the product” and a resulting uncertainty of what, where, when and for how much that product can be made available. I didn’t want to announce vague timelines that I wouldn’t meet or prices that would likely change a bunch as I figured things out.

With each iteration and improvement in my ability to make them, a prototype stick I had considered “good enough” before suddenly required an update. These constant changes and the refurb nature of the modules also meant that each stick is a bit of a unique beast. That’s something that’s taken a while to fully understand and dial in. Variability isn’t good when the idea is to offer user interchangeable parts further down the road.

The refurbed gear arms in particular have been a major headache to get right. A big source of variability, I recently switched from a hand finished approach to full machine finishing after noticing some problems with the gears “relaxing” slowly after assembly and issues with embedded grit. This is just one example of the kind of changes that I’m making and again it took some time to dial the process back in after changing things up.

Pretty much every part of the stick has gone through a bunch of iterations and workflow refinements similar to this with the aim of improving consistency in the end result. Of course the trade-off to this is that I haven’t gotten as many finished sticks out of the process as I’d like.

In short I’m getting better at building these things every day and solving important issues as I go, it just takes a lot of time. I know you guys are keen to know more and I appreciate your patience. 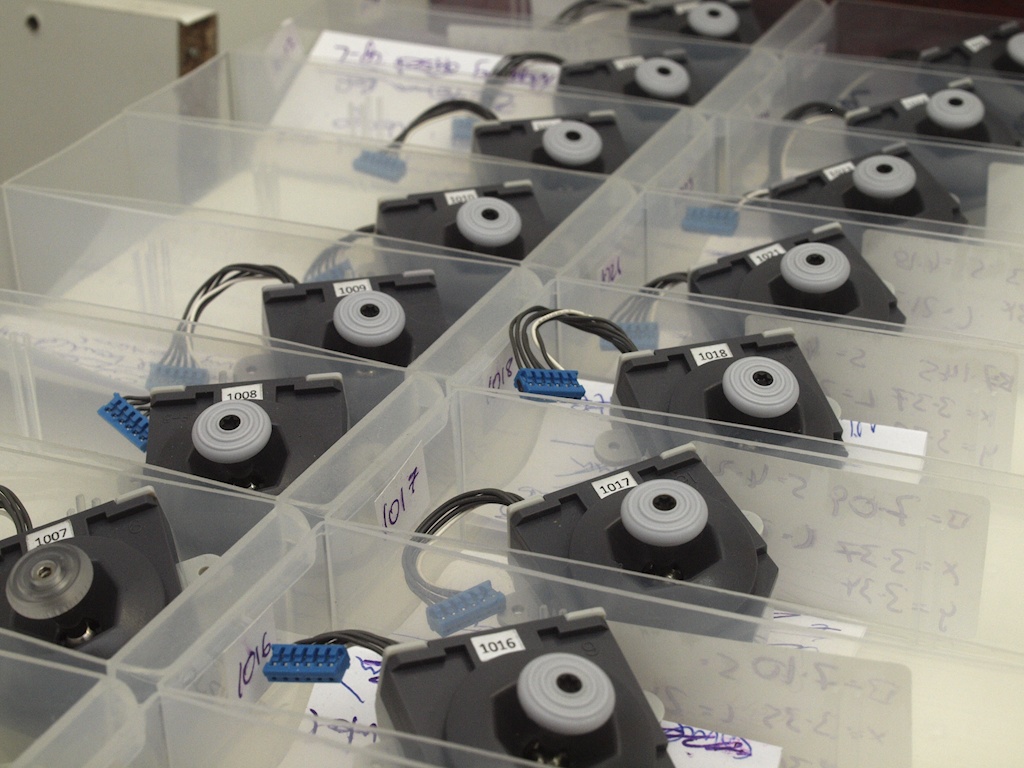 Since the beginning I was getting steady messages of interest. Not knowing many specifics about how I was going to build and sell these sticks I felt the best option was to put everyone on a waiting list. That way those of you who found the project early on would at least be first in line for when I did start selling them.

The level of interest exceeded my expectations quite a bit and the waiting list quickly grew out of hand. To the point were simply responding to requests and updating the list was significantly cutting into time that I would have rather spent in the workshop actually improving the sticks.

I’d love to have enough time to both work on the sticks full-time and also keep everyone updated through email responses, forum posts and twitter updates but often I had to prioritize the former and neglect the latter. So I apologize if I didn’t get back to you with a response or if things were unclear. I hope that with this site going up, more details being available and with me generally getting a better handle on the build process that I can make more time to detail the process and keep everyone in the loop.

I get a lot of questions about how far through the wait list I am. So just to clarify, other than about a dozen prototype sticks that went out to testers in Spring no one on the wait list has been offered any sticks yet. I had some Early Adopter sticks built and was planning on sending those out at the end of August but ultimately decided to hold off and incorporate some improvements which delayed things till now.

So, all that said it’s finally time to shift focus away from tinkering for a bit and work on getting some sticks out to people before Christmas.

This is the start of what I call the “Early Adopter” phase. If the first batch of prototype sticks going out was “Alpha testing” then this is a kind of paid “Beta testing” where the goal is to get the latest “stable” iteration of sticks into the hands of more people and assess how the improvements fare in the real world. Of course it’s also a chance to test the purchase system on the site, sort out the shipping process and figure out all manner of other logistical stuff. A practice run if you will 🙂

I have at least 20 stick modules built and ready to go and will be contacting those people shortly after this site goes up. All going well I’m hoping to get a good number of these sticks shipped out and into your hands in time for Christmas.

The following should give you an idea of how the wait list process will work.

That’s the plan right now, we’ll see how things go. I’m excited to start offering some sticks for sale and look forward to hearing the feedback once they get out there.

In an effort to minimize my email load here are some expected questions, there’s also some other questions answered in the FAQ section

Q: I don’t know my wait list number so I’m not sure if I should be looking out for an email.?

Q: I’m further down the list but still in the “Early Adopter” (Top 100) how long will it take until I can get a stick?

Q: I was told I was on a shortlist as a tester from the previous rounds of testing. Am I  also on the early adopter list?

If you have any questions about Early Adopter specific stuff that isn’t answered here or in the FAQ then shoot me an email: info@steelsticks64.com